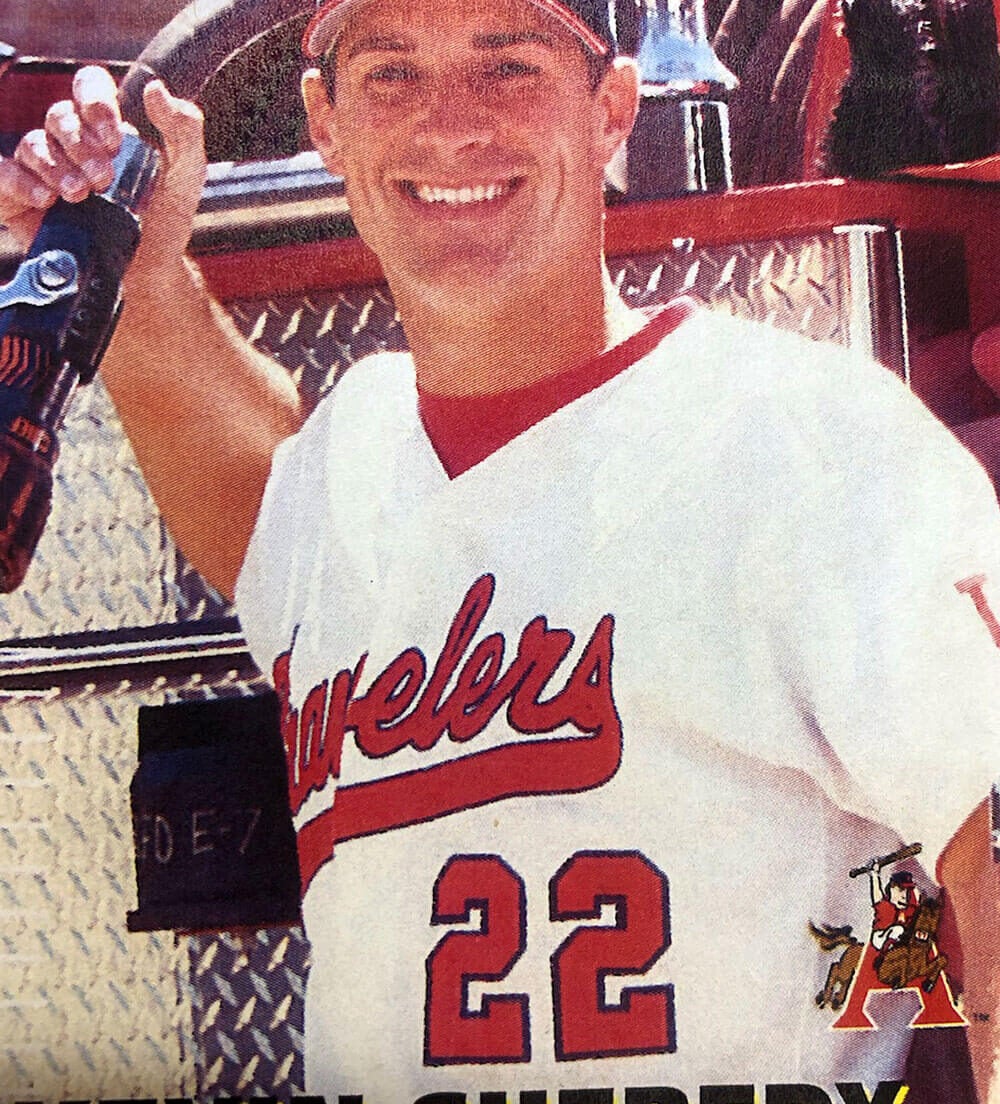 Kevin Sheredy took to Arkansas from the start; when he signed to play college baseball for the Razorbacks, the state reminded him of the rural Michigan home where he grew up. Eventually, Arkansas served as a launch pad for a pro baseball career that ferried him to points across the continental U.S. and even the world. Now, it’s just home.

Kevin’s right at home in Arkansas Federal Credit Union’s Cabot office, where as a mortgage loan originator he helps put families in their own new homes. Meanwhile, he’s raising a family of his own in Cabot.

“The people in Arkansas are just the same as the people in northern Michigan,” Kevin said. “Laid back, like to hunt and fish. Life is the same, all good. Just different climates.”

Before his journey led to Arkansas Federal, Kevin experienced a few climate changes while chasing the dream of pitching in the big leagues. A tall right-hander, he did good things on the mound for the Hogs, finishing second in saves among SEC hurlers his freshman year. This early success led him to the prestigious Cape Cod Baseball League, a summer league for college players.

Kevin shined on the cape just as he did on the Hill, leading the Cotuit Kettleers to the league championship as a starter with a sub-1 ERA.

His minor-league stops included the Pacific Northwest, east coast and baseball hamlets nestled throughout flyover country in between. He made it to the doorstep of the bigs with Memphis, the Triple-A affiliate of the St. Louis Cardinals, and even pitched professionally in Amsterdam and France. Some might argue, however (and Kevin probably would let them), that his most exotic stop was iconic Ray Winder Field in Little Rock, where he spent a couple of seasons with the Travelers.

Kevin likes to quote the Grateful Dead – “what a long, strange trip it’s been” – but he never forgot Arkansas. He’s grateful the trip brought him back to the state and after working at other local banks, he’s grateful it brought him to Arkansas Federal.

“This is where I met my wife and where my son was born and is growing up,” he said. “This is home now, and Arkansas Federal is where I need to be. Having worked at other banks, I can appreciate the sense of community at Arkansas Federal and just how hard it works on behalf of members.”

AFCU: So, why Arkansas to play your college ball? Were other colleges recruiting you for baseball?

KS: Absolutely, I initially thought I’d sign with San Diego State. Later in the process, I got offers from LSU and Mississippi State. Arkansas came to my high school just outside of Grand Rapids one April and sat outside in typical Michigan weather. Seriously, they had to sit through snow flurries and frigid temps, and that really meant a lot to me.

We went to eat with my mom, and I was sold on Fayetteville. They already had the artist rendition of what is now the best college baseball stadium [Baum-Walker Stadium] and fans in all of NCAA baseball. I was sold on UA and my mom loved and still loves Arkansas. Plus, it’s not snowing in April here. LOL…

AFCU: Minor-league baseball means moving around a lot. How many cities and towns would you say have served as your temporary place of residence?

KS: That’s a lot of little towns throughout our great country, but my teams were based in Florida, Virginia, Connecticut, Illinois, Arkansas, California and Tennessee.

KS: Tough question. Playing in Holland just outside of Amsterdam was amazing. They seemed to love baseball and they treated it like you might see in Latin America….lots of whistles, drums, chants and general enjoyment with just being out at the ball park. We were able to take a train to the beaches of Normandy (if that doesn’t humble a person, nothing will) and the idea of buying a euro pass and going wherever you wanted was incredible.

France was a little a different but still great. It was post 9/11 and things were a little different but being in Paris for the summer solstice, going to the Louvre, the south of France, etc., was unforgettable. I’m very thankful for those opportunities 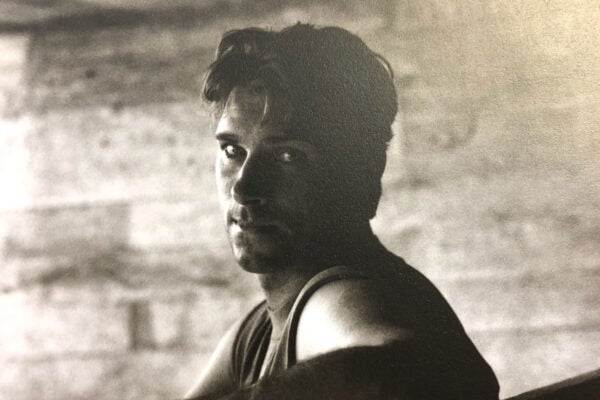 AFCU: You made it all the way to Triple-A ball with Memphis, the cusp of the major leagues. Just how close were you to being called up?

KS: I was close. I pitched 13 innings in big-league camp and gave up one hit and no runs. At one point, I led the [Triple A] Pacific Coast League in appearances and was 2-0 with two saves and a 2.3 ERA. But I ended up tearing my interior-shoulder capsule. Subsequently, that was about the end of my career, less limping around for a few years. My shoulder still doesn’t work correctly.

AFCU: You spent part of your baseball career in the ’90s with the Travelers at old Ray Winder Field in Little Rock. What’s your best story about that iconic, old ballpark and the Travs’ equally iconic, old general manager, Bill Valentine? And remember this is a family post…

KS: As do many Arkansans, I have a lot of great memories of Ray Winder Field. I didn’t realize how many people I would come across who would have stories to tell of going to games there. It was definitely different seeing it from the dugout versus the stands, but equally as memorable. Bill Valentine was quite a man, as anyone who knew him would say. I enjoyed my time under him, even though he would tape the AC switch in June and July so that we couldn’t turn it on so he could save a few bucks!

AFCU: When baseball was done, what drew you back to Arkansas?

KS: What draws you to Arkansas…what brings you back. For me, it was the great people, the family dynamic, the beautiful land, the great schools, my wife is from Arkansas and her family is here, and now my son is in AP classes at Cabot and enjoying football as a seventh grader. (Although I wish he would play baseball!)

AFCU: Anyone acquainted with Kevin Sheredy knows he was born a “people person.” Making the rounds through minor-league ball surely had to help you hone those natural relationship skills. How has that experience helped you connect with Arkansas Federal members, and what distinguishes the credit union from other financial institutions?

KS: Traveling corner-to-corner of this great land allows you to make relationships with people — host families, booster clubs, stadium workers and fans. Relationships are what we are about at Arkansas Federal. Those relationships mean more than anything else. For one, being at Arkansas Federal means you get the pleasure of meeting with so many servicemen and servicewomen from all around the country. I can relate to where they are from, and generally I know a restaurant or local place that they know.

It comes down to listening, caring and helping. At Arkansas Federal, we are built around that very concept and it matters to me. Unlike professional baseball, every Arkansas Federal member is a face, a name, a member as much as we are. We care for our members, not for stock holders. It’s a blessing to be a part of that.