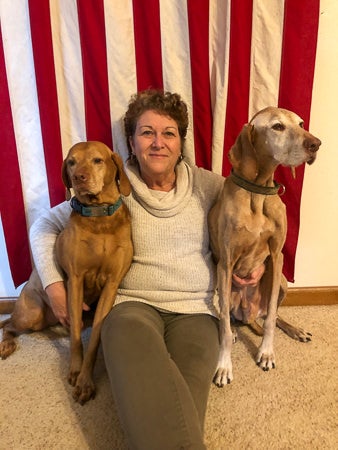 No one knows for sure how long dogs have been by our side, but scientists and archeologists generally agree that dogs were kept as domesticated pets as far back as 15,000 years ago.

While not everyone is a “dog person,” and likewise not every canine a “people person,” the connection between man and dog is undeniable. Nancy Rowan, a service-center consultant in Arkansas Federal Credit Union’s North Little Rock office, perhaps understands better than most how that connection works.

Nancy works with therapy dogs, those four-legged friends specially trained to interact with people in need of some lovin’, for lack of a better phrase. While most people associate them with sick children in hospitals, and that’s a big part of their job, therapy dogs are used in a wide range of situations and settings.

And thanks to Arkansas Federal’s policy of allocating four hours a month on company time for employees to volunteer in their communities, Nancy and her two dogs have been regulars in the cancer ward at Arkansas Children’s Hospital for a decade.

“It’s very cool that Arkansas Federal lets us do this,” Nancy said. “I love volunteering and I love bringing the dogs to Children’s. I go in with a credit-union shirt on; I’m a walking billboard. People know I’m there because of Arkansas Federal and that it cares about the communities it serves.”

The therapy-dog program is administered in central Arkansas by ABLEPaws, for which Nancy serves as the PR contact. ABLEPaws is part of the national Pet Partners network which trains, registers and certifies dogs and other animals to work with their owners as a team. It requires re-certification every two years for both dog and owner because temperaments can change as age sets in. That goes for both dogs and people. (This vastly distinguishes therapy dogs and working dogs from “comfort” dogs, a misinterpretation that can be a source of frustration to some who work with trained dogs.)

Therapy dogs undergo special training to interact with people in a sensitive setting. They must remain calm at all times while maintaining a happy disposition. No on-the-clock ball or squirrel obsession here.

Nancy’s dogs – Kobi, 13, and Sadie Mae, 9 — are favorites at Children’s. They are Vizslas, popular, medium-sized bird dogs originally from Hungary. (Think Weimaraner meets coonhound.) Adept retrievers, Vizslas are good-natured and sport an affectionate personality that’s made them popular as pets and as it turns out, quite effective as therapy dogs.

The program is open to any dog regardless of size or breed, and ABLEPaws offers practice and skills-set sessions at its own dedicated classroom inside Children’s. When Nancy became involved with the program a decade ago, there was just one registered evaluator in the state to certify animals and a limited number of therapy dogs. Now, she’s one of seven registered evaluators and Arkansas is home to 68 registered therapy-dog teams. Most are in located in and around Little Rock but the program will certify dogs and their owners from anywhere in the state.

In addition to local hospitals and rehab centers, ABLEPaws sends therapy dogs to schools, where its therapeutic arts program targets students with disabilities and the dogs sit in on school reading programs. It also sends dogs to non-profit organizations such as Our House, to local festivals and charitable fundraising events and walks as well. Local colleges even bring in therapy dogs to help relieve students’ stress during exams. (Older readers may need a moment to process.)

And whenever it can, the program educates kids on proper behavior around dogs, how to approach one and not be scared.

In 2018, ABLEPaws partnered with Little Rock’s Clinton National Airport, where dogs are made available to help comfort those anxious about flying. For example, children embarking on trips as part of Make-A-Wish or Special Olympics and wary of getting on a plane forget their worries the second a therapy dog shows up, Nancy said.

Therapy dogs provide comfort indeed, but their work with convalescing patients of any age is important in the rehab and therapy processes. And not just recovery. They can seem part of the cure as well.

A wheelchair-bound boy in the Children’s playroom who had trouble moving his hands and arms instantly responded to Sadie Mae after other efforts to stimulate his mobility had failed. Newly motivated, the boy rolled the ball off his fingers for Sadie to retrieve. Seeming to understand the boy’s physical limitations, the four-legged care provider stretched to place the fetched ball in his lap.

Nancy has many such anecdotes. The anguished screams of a young cancer patient filled the hallway on one visit. The cure sometimes being just as difficult to endure as the disease, the little girl was scheduled to receive another round of chemo; the IVs had to be placed in her shaved scalp.

The nurse who was accompanying Nancy quickly secured permission to bring in Kobi. The child was asked if she’d like to pet a dog before they began the procedure, and her countenance immediately changed. Her blood pressure dropped significantly. After a few moments of introduction, Kobi joined the girl on the bed cuddled at her side. The patient, now at ease, told her parents and the doctor that she was ready to begin.

Later, the doctor told Nancy that he’d never seen someone’s blood pressure stabilize so fast, and that he had become a true believer in these dogs.

“It’s just amazing what dogs can do,” Nancy said. “Dogs sense things, they know what to do. It’s amazing their sense of what’s needed.”

Therapy dogs have made quite an impression in central Arkansas. Both Children’s and the airport have created a series of trading cards featuring ABLEPaws dogs. Kobi and Sadie Mae have their own set at each place. The kids love them. After all, the ABLE acronym in the group name stands for “Animals Brighten Lives Everywhere.”

Nancy, for one, knows therapy dogs can do much more than that.