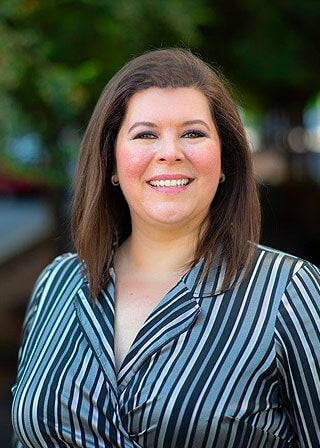 Arkansas Federal Credit Union employees give back to the communities they serve, perhaps none so much as Marketing Director Denise Goforth.

Denise embodies the credit union’s commitment to community service. A longtime civilian volunteer at Little Rock Air Force Base, Denise’s work on the base earned her a nomination earlier this year for the prestigious Tampa Bay Trophy from the Tampa Bay Defense Alliance, a national award recognizing a civilian volunteer for distinguished service and contributions to airmen.

Little Rock Air Force Base is, after all, Arkansas Federal’s original community. Now statewide with membership open to all Arkansas residents, the credit union was founded in 1956 to serve Air Force personnel and their families stationed at the base. As the daughter of a 28-year Air Force veteran, Denise was drawn to serve the men and women of the base and as a teenager began volunteering to teach base children how to pour, clean and paint ceramics. She’s been volunteering at the base ever since.

Denise currently is the 314th Airlift Wing’s Honorary Commander, serves as an executive board member of the LRAFB Community Council and chairman of the Air Power Arkansas Committee (APA), and also serves on several military relations committees.

Her fundraising efforts and work as chairman of the Air Power Arkansas Committee led to numerous successful base events including the 60th Anniversary Ball, the 2016 LRAFB Military Expo, the Air Force 70th Anniversary Ball, the 2019 Team Little Rock Air Force Ball, and the 2018 LRAFB Thunder Over the Rock Air and Space Show for which the APA Committee raised more than $89,000 in sponsorships and in-kind donations.

Council President Michael Watson estimates that Denise donated more than 300 volunteer hours on the base over the past year.

“Her efforts in preparing the air show last fall, including the requests for sponsorships and managing the actual events for guests, were invaluable to the success of the event that brought over 200,000 people to the base,” he said.

Denise’s proactive approach to service made an impression on Col. Gerald Donohue, former commander of the 19th Airlift Wing at LRAFB now assigned to the Pentagon. “She is a passionate voice telling the base’s story and is always looking ahead to the next thing that will help our airmen,” he said. “Case in point: in the past, she has been critical to the success of our Air Force Ball, and this year she has a target of raising $100,000, with the ultimate goal of reducing the cost of airmen to take part in the event.”

“She has not just exceeded the efforts of those I have worked with before but set new standards for what a devoted servant to our airmen can be,” he said. “From huge efforts to the smallest offering, Denise demonstrates devotion to our airmen and shows her servant’s heart. You can find no better teammate or civic leader.”

Outside the base, Denise is an adult volunteer and Troop Leader for Girl Scouts and an active member of Arkansas Children’s Hospital Auxiliary. She also serves on the military relations committees for several local chambers of commerce near the base. And during the holidays, she even welcomes airmen to her home for family meals.

“Community service is one of the greatest gifts we can provide, and I feel that it’s my duty to instill this quality into my children and encourage my family and friends to get involved,” she said.

This fall, Denise represented the LRAFB Community Council at the Defense Community Leadership Academy in Washington, D.C. The program is designed to develop leaders at the local level to improve the support systems and quality of life for service members and their families.

“The leadership conference probably provided attendees more information from Denise than she could gain from others, as we know of no other base with as much day-to-day interaction on so many levels,” she said. “The opportunity to share her experiences here at LRAFB assured Denise and other attendees would learn from one another.”